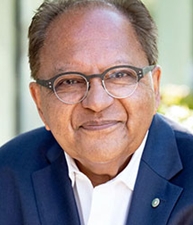 Dr. Zul Merali is a neuroscientist and pharmacologist by training (with training from McGill University, University of Ottawa and Wharton), having over 40 years of academic engagement.  Has published over 250 peer-reviewed scientific publications. He has used his proven academic and entrepreneurial ability to add value to forward thinking organizations to help address mental health problems, locally, nationally and globally. His objectives have been to build and/or re-engineer organizations to deliver outstanding results and motivating and encouraging others towards positive change. He is the Founding Scientific Director of the Brain and Mind Institute at the Aga Khan University and is appointed to AKU’s Medical Colleges in both East Africa and Pakistan.

Dr. Merali's research endeavours, supported by grants from CIHR and NSERC, characterized the body's response to stressful and appetitive events and the relationship of stressors (including early-life trauma) to mood and anxiety disorders. Another focus of his research is to determine how pharmacological interventions (pharmaceutical and nutriceutical) may attenuate stress-induced pathophysiology. In this vein, he and his colleagues have been attempting to isolate anti-anxiety compounds from a variety of rare plants. Dr. Merali's research investigations extend from the behavioural to the cellular and molecular levels, and involve experimental animals as well as human subjects.